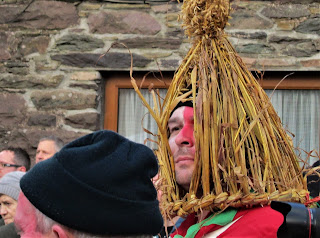 December 26, just after the winter solstice, is The Wran's Day, as much a part of the holiday season here in Corca Dhuibhne as Christmas Day itself. This year, because of Covid, and for the first time in living memory, the celebrations have had to be cancelled. The sorrow is palpable but so is the determination to come back even stronger next year. Here's an extract from my 2013 memoir The House on an Irish Hillside, to give an idea of what we're missing, and what we look forward to.
'If you study folklore or anthropology, you learn that the Wran’s Day belongs to a tradition that stretches back to the first people who came here, thousands of years before Christianity. Its name is a corruption of the English word ‘wren’, and in Irish it’s Lá an Dreoilín. There’s endles research on the Wran’s Day, and suggestions that dreoilín, the word for wren, comes from draoi-éan, ‘druid’s bird’. It’s linked to ancient midwinter festivals and shamanism, when a shared web of ideas and information was accessed like a form of internet powered by human energy, and to later folk traditions like Straw Boys and Guisers. Its rituals belong to a dream state beyond stories, or even words, when there were just images and rhythms. But if you turn up in Dingle on 26 December, what you’ll see is one big party.
Basically, the town gets taken over by musicians and dancers. In the past, the boys back west used to dress up in rags and old coats turned inside out. They’d smear soot on their faces, or wear masks, and go from house to house, playing music and asking for pennies ‘to bury the wran’. Then they’d use the money to buy food and drink and throw a dance. Earlier still, live wrens used to be hunted and killed and carried in procession. Earlier than that, at huge ritual gatherings, kings offered themselves to be killed at the turn of the year, in an extreme version of sacrificing the best you’ve got in times of scarcity. Through the nineteenth and twentieth centuries, the Church did its best to suppress the Wran’s Day. But it never succeeded; and its ancient, wordless rhythms are still felt here every year.
Some kids still walk the country roads in costumes, and turn up at their neighbours’ houses to dance in the kitchen. Each group is called a ‘wran’. You hear the creak of the gate and the rattle of a drum outside the window. Then tattered figures with masked and painted faces crowd into the house, disguised in their granny’s aprons, padded with rolled-up socks; or their dad’s pyjamas, tied with rope and stuffed into wellingtons. As they come into the room, accordion players pull their masks down over their faces and whistle players push them onto their foreheads; the smaller figures giggle and shuffle. Then someone gives a note and the little group breaks into a jig or a polka. But these days most people head for Dingle instead, and join the rival parades that march and dance through the streets playing music. Máire Begley blames it on the carpets. "The real Wran went out the door the day the carpets came into the houses. No one wants mud on the floors nowadays. That’s why they all go in to Dingle!"
The Wran’s Day in Dingle is famous. Nowadays, when the collections are for charities, the wrans compete to see who can raise the most money on the streets and in the pubs. Different tunes belong to particular streets, and each wran carries its own banner. They march wearing different colours, green and gold, crimson and white, and chequered white and blue. Each wran is led by a prancing horse with a wooden head and snapping jaws. They’re echoes of Lugh and his fiery stallions and of the Goddess, one of whose names was Epona, Mother of Mares. The horses’ cloth bodies, stretched on wooden frames, hang from the shoulders of the marchers. Behind them are jostling figures in high, pointed masks, whirling skirts and woven breastplates, made from oat straw. They march in line, beating drums and playing fifes and whistles. The golden skirts swing in time to the music as the horses whirl and caper in front of the marchers, and dart through the crowds that follow them. The traditional carved wooden heads and the straw costumes are beautiful. And slightly sinister. Under the straw masks, faces are painted in stripes, or blackened. Eyes gleam through painted eyeholes. One horse’s snapping teeth are the dentures of a dead man who used to dance in him.
And weaving through the crowd are other dancers. Figures with rubber pigs’ heads, in high heels and paint-spattered boiler suits. Skeletons with padded buttocks and breasts. Wolves in wraparound Aviators. Farmers with soot-smeared faces dance past in blue wigs wreathed in tinsel. Grannies wear beards and flashing Santa hats. Onlookers scream as they’re dragged into the street and chased by the snapping horses. People stand in doorways and lean out of windows, throwing coins. As each wran swings by, through the streets and in and out of the pubs, scattered groups are left behind, laughing and taking photographs.
Last year, on the streets of Dingle, I watched a dancing figure in a straw skirt and a painted paper mask. I don’t know if it was a man or a woman. The feet were in heavy boots and the hands wore outsize gardening gloves. The head was crowned with horns. The dance was a little, circular, shuffling jig. Three steps forward, two back and then three steps forward. Then the dancer whirled round,and the circle began again. And from behind me, I heard a bellow of answering voices. ‘Fair play to you! Keep at it! We never died a winter yet!’
Extracted from  The House on an Irish Hillside, Chapter 12 'Dancing Through Darkness'. 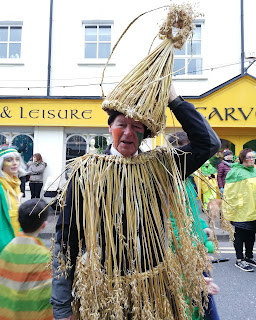