My Irish publishers Hachette are bringing out my fifth Finfarran novel on May 2nd and the  Gutter Bookshop in Dublin is hosting its launch, with drinks provided by my lovely West Kerry neighbours, The Dingle Whiskey Distillery. So here's an invitation to join the celebration. Do, please, come along if you're in Dublin on May10th.

Writing the Finfarran novels is always a joy but this one is special because its plot came about by sheer happenstance.

A few years ago, in a gift shop, I picked up a birthday card with the caption ‘My book club can beat up your book club'. A lady beside me had spotted it too and we got chatting. The card had caught her eye, she said, because she was a member of "Ireland’s only Skype book club", hosted by her rural local library and a public library in Peoria, Illinois, USA.

Months later, when I was chatting to my agent about possible plots for the next Finfarran novel, it struck me that a book club based in two countries might make a good story line. My agent and my editor loved the idea - as did my publisher over in the US - so I sat down to write in the knowledge that they were as excited about it as I was.

Then, with a sickening thud, I realised that I hadn’t a clue how a Skype book club worked. Was it a kind of conference call and, if so, why would the members get together physically? Wouldn't they just log in from their home computers? I couldn’t begin plotting until I’d properly grasped the logistics, which meant that I needed to get in touch with the library the lady had mentioned. But to my shame, I’d forgotten both her name and the town she’d said she was from.

So I took a tea break and walked around the house, afraid I'd have to tell everyone that I'd need to rethink the storyline. But then I was inspired to log onto Twitter and tweet

Twenty minutes later Twitter delivered. I had responses from two different Irish libraries, putting me on to Marie, a librarian in Co. Tipperary. So I called Marie and, once again, was blessed by happenstance. The next of the club’s quarterly meetings was scheduled for the following week and I was invited to come and join in. So a week later I was on my way to visit Ireland's only Skype book club, which has quietly been flourishing for to past eleven years.

It was wonderful and felt completely surreal. The lady I’d met in Dingle, was there to greet me, and we chatted while the Tipperary group gathered and Skype contact was established on a laptop linked to a screen on the wall. Then, suddenly,  the screen sprang to life and there was the group in Illinois, sitting on rows of chairs, just as we were in Ireland. Immediately, the logistics became obvious. There was a facilitator on either side of the ocean, and everyone was accustomed to raising their hands before making a comment, and to facing their camera and microphone when they spoke. (Turning round to respond to a comment meant strained faces on the opposite side of the Atlantic, where people could neither see your face nor hear what you wanted to say.)


The club’s choice for the session was Sebastian Barry’s Days Without End. It was remarkable to see and hear the different takes and ideas bouncing back and forth across the ocean and, by the end of the session, it was evident that everyone would be going home with a new, communal sense of what they’d read as individuals.


I’d known before setting out that day that my fictional book club would read a classic detective story, and I’d planned how my various story strands could come together via that device. Before returning home to begin writing, I fixed on the title The Transatlantic Book Club, and got the real Skype book club's permission to dedicate it to their members. I've since heard from Marie, the Tipperary librarian, that, when it's out on both sides of the Atlantic, they plan to discuss it at one of their club meetings. And, wonderfully, they've invited me to come and join in.

Meanwhile, Marie will be among the guests raising a glass in The Gutter Bookshop in Dublin on Friday May 10th. I hope you'll be able to join us. If you do, come up and say hi and tell me you heard about it here. 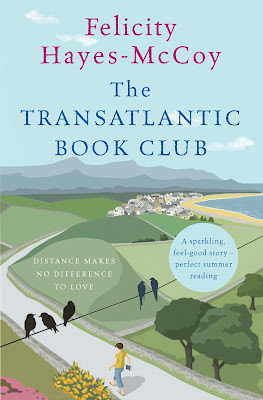