Showing posts from June, 2015
Show All 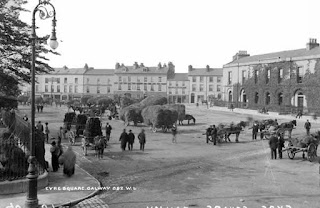 First there was the Galway chair. There was a family story that it was made as a wedding present. I don't if that's true. I know that it once stood in my grandfather's home in Galway, in a room above his barber's shop in Eyre Square. I know that, when the shop was sold after his death, it came to Dublin with my grandmother, a charming, angry woman, who took to her bed on arrival and stayed there, in a temper, till she died. I know that when I was born, my father shortened the legs so my mother could use it as a nursing chair. I remember kneeling in front of it when I was five, playing house; I put a pastry board across the arms as a roof, and tucked my teddy to sleep on the seat. When my mother died it went from our house in Dublin to my brother's house in Enniscorthy. On the twenty fifth anniversary of my own wedding I asked him if I could have it as an anniversary present and it crossed the the country again, from Wexford to Corca Dhuibhne
Post a Comment
Read more
More posts