Showing posts from July, 2013
Show All

You're looking at the face of Crom Dubh, The Crooked Dark One. Depending on which team you batted for in pre-Christian Ireland, he was either Lord of The Harvest or The Bringer of Famine. And a thousand years later, depending on whether you were a Christian convert or a stubborn adherent to the old gods, he was either a pagan wizard banished by holy St. Brendan or a dark and evil deity defeated by the sun god, Lugh. Across the millennia, his stone image was preserved in the village of Cloghane, at the foot of Mount Brandon here in Corca Dhuibhne. And each year people climbed the mountain from the east to celebrate his annual festival with bonfires, feasting, dancing, hand-fasting and sacrifice. Mount Brandon is Corca Dhuibhne's holy mountain. Brendan the Voyager, the medieval saint said to be the first European to reach the New World, began his epic voyage from Brandon Point at the north western end of the peninsula. Before setting out with his companion mo
10 comments
Read more 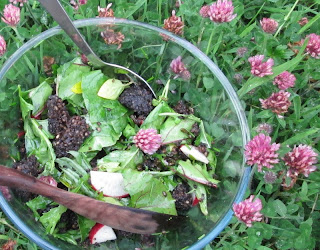 Nothing beats the pleasure of arriving home to a garden that's suddenly sprung to life in two weeks of  sunshine after a slow, chilly start to an Irish summer. Grass in the orchard high enough to tickle the backs of your knees. Apples swelling on branches and fuchsia flowering on the ditches. Opening windows ... leisurely unpacking ... checking the post ... a little watering ... a beer at sunset ... and then the first home-grown salad of the season. Broad bean tops. German radishes.Young rocket leaves. Baby spinach leaves. Red clover leaves and flower heads. Chive flowers. Rainbow chard leaves. Parsley flowers and chopped parsley stalk. Beetroot leaves. Marjoram buds and flower heads. Chopped chives. Shredded garlic stalks fried in olive oil with black pudding.  Tossed in a bowl with sunflower oil and cider vinegar. And served at the kitchen table with more beer and  crispy ciabatta. Visit The House on an Irish Hillside on Facebook
Post a Comment
Read more
More posts