Showing posts from June, 2013
Show All

Strawberries and Cream in a Writer's Dream Venue. 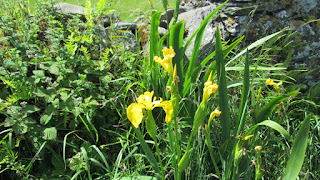 All my childhood memories of Enniscorthy revolve round fruit and flowers. My grandmother’s house there was built on a hill. I remember roses in the garden, and tall lilies on thick stems, with ivory petals like curled pollen-powdered vellum. Tattered, golden irises, called flags, grew near a row of tumbledown stone sheds. There was a broad, scrubbed step outside the kitchen door and a path ran down the garden to an orchard of apple trees and fruit bushes. Granny was frail by the time I remember her. There was a starched cloth on the polished table where we had tea when we visited; the cups were her own mother’s sky blue and white china, patterned with flowers. I remember gooseberry and blackcurrant jams made with fruit from the garden, and ‘country butter’ served on slices of her own brown soda bread. The strong taste of the salty butter was almost like cheese. Each year in June we’d take the train down from Dublin for Enniscorthy’s Strawberry Festival. Bowls a
Post a Comment
Read more 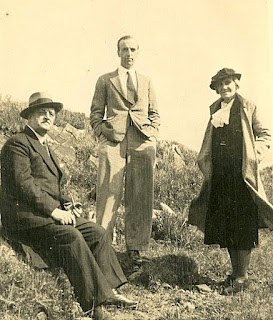 My father G.A. Hayes-McCoy and his parents, Galway, 1930s When I was a child in the 1950s my father worked in the Art and Industrial Division at the National Museum of Ireland. He subsequently became a noted military historian but, until I was five or six,  he was an assistant keeper at the museum, with responsibility for the Military History and the War of Independence collections. When I visit the museum today I can still feel his presence. He was fascinated by archaeology as well as history, and so passionate about Ireland's past that, even at that young age, I learned to share his enthusiasm. It was a passion rooted in a philosopher's sense of the universality of human experience as well as in delight in his own cultural inheritance, and, above all, it was founded on a pursuit of truth. Looking back now, I'm aware that his uncompromising insistence on the importance of facts over nationalist sentiment must have made him unpopular in some quarters in the I
3 comments
Read more
More posts