Showing posts from August, 2012
Show All

How to Celebrate National Potato Day 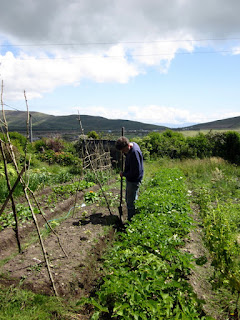 Potatoes are a serious matter in rural Ireland. Dinner's hardly dinner without them. Connoisseurs will tell you that Queens are better than Home Guard and that Champions are subject to blight. Pub bores make annual announcements that the floury spud, now, would be the Irish choice while the English want them waxy, which the world and his wife know well is just perverse. And each year during the growing season when the radio, television and Met Office issue warnings about threatening weather conditions, everyone eyes the stalks on their ridges warily. Potato blight can strike after a single night of heat and humidity, and unsprayed crops can 'melt' and turn black, the stalks wilting and the tubers beneath them rotting into the earth. Every year we debate the question of spraying. If you're like us you don't like the idea of covering your food with chemicals. If you're a farmer with a lifetime's experience of saving and setting seed, tending you
7 comments
Read more
More posts