Years ago, when I was writing for tv drama series, I learned to carry a very small notebook indeed. This was back in the days before notebooks were digital, when writers still suffered from stationary-envy and every meeting began with covert glances at other people’s desirable A4 Filolfaxes. Actually, back in those days, large-format notebooks had much to do with power games. The subliminal message of a really big leather-bound tome and a flashy Parker pen was that your agent had bumped up your fee for the series, or that your last show had just been sold as a franchise in the US. 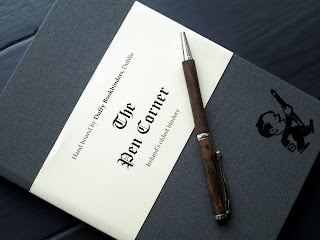 My own titchy little notebooks had nothing to do with poverty, or even reverse psychology. They were a cunning way of controlling an impulse to express my emerging ideas in diagrams rather than words.

At development meetings attended by a producer and several other, highly articulate, writers, bits of paper covered with arrows and interlocking circles weren’t approved of. Hence the voluntary strait-jacket of a notebook so small that it fitted into the pocket of my jeans. But now, sitting at home in my PJs, preparing to start on a novel, I can indulge in what, to me, is a vital part of plotting a work.

Visuals are particularly useful if you’re working on a series of novels. With the Finfarran books I began by sketching a map of a fictional peninsula before creating my characters, some of whom were peripheral in the first book, led by my librarian protagonist, Hanna Casey. Working from the map, I located each in terms of where they lived and/or worked: and knowing where they came from in this literal sense fed into their development. Hitherto shadowy characters often come forward in subsequent books, so I still review the map whenever I’m planning the next book. But, as each novel stands alone as well as being part of the series, each has its own chart. 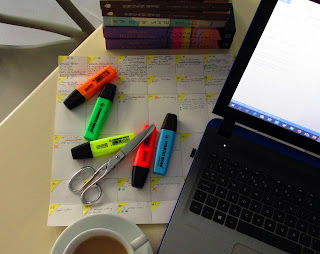 Beginning with a draft in a squared copy book and moving on to a wall chart, drawn up on A3 paper, I can plot the shape and flow of a book in purely visual terms. The starting point is my 90k word count. Rounding it up to 100k, to make the maths easier, I divide it into chapters of a notional two and a half thousand words. Then, using a pencil and a ruler, I allot a box to each chapter, and number them.

The narrative thrust of the Finfarran novels has so far been largely carried through internal monologues, and dialogue. This contributes to the readers’ sense of involvement in, and being part of, a fictional community. In structuring, I generally attribute a chapter to each of the principal characters and, by mapping these across the chart, ensure the characters’ presence is evenly balanced across the book.

Then, having established A, B and C story arcs which will span the entire novel, I plot them across the chart, indicating where they’ll begin and end. Each story arc will belong to one or two principal characters or families. The A story - which in The Library at the Edge of the World and Summer at the Garden Café was Hanna Casey and her family’s, and in The Mistletoe Matchmaker was Cassie Fitzgerald’s - will span the whole book from Chapter One. The B and C stories will begin later and end somewhere in the last few chapters, with B continuing longest. Both of these are always wrapped up before the final dénouement.

Each character has a colour, indicated on the chart with a hi-viz sticky dot, square or triangle. The beats in each storyline are indicated by symbols. Then the passage of fictional time across the book is marked – weeks or months, for example; or seasons when the landscape will change; or the occurrence of calendar-related events like Easter or Ramadan. And there are other specifics: for example, in The Month of Borrowed Dreams, the latest in the series, I also needed to indicate each character's process in reading the book my fictional library film club was discussing.

Though the initial process might seem prescriptive, in practice the way I use the chart is fluid.  It hangs by my desk and, to begin with, tends to be fairly neat. Over the months of writing, it gets increasingly messy, with the chapter boxes filling up with notes and scribbled memos, and arrows and crossings-out indicating changes of mind. The coloured character dots are sticky because I often find I need to move them. In writing the story, certain characters take over, jostling others out of their place in my scheme: but by moving the dots I can see at a glance if the book has lost its rhythm, which can happen if particular voices are present or absent too long.

Sometimes the evolving storylines require structural changes. In Summer at the Garden Café, for example, my editor pointed out that it was Jazz, not Hanna, who really had the A story and, to make this work, I introduced Jazz earlier in the book. This involved moving chapters which, on the chart, had appeared later – which, inevitably, meant other adjustments too. But with the chart at my elbow, I could see at a glance not just how I’d affected the narrative but what the knock-on effect would be on three interwoven storylines, each of which exposed and advanced the book’s underlying themes. 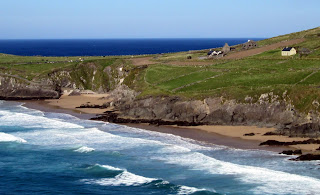 Themes and characters’ personal relationships can’t be contained in squares or circles, or held in place with arrows. They emerge from the writer’s unconscious in the telling of a story, with the same thrill of discovery that drives an author to write and compels a reader to read. For that to happen, I find I need a safe space for freefall. And before taking that leap, I need to create a reliable structure - firm enough to act as a template but supple enough to bend in the creative process without breaking.

Maybe that’s why I created a protagonist whose dream was to work in an art library, and whose first experience of books arose from a love of colour and shape.

A version of this piece first appeared on the Irish writers' website Writing.ie

Come and say Hi on my official Facebook Page 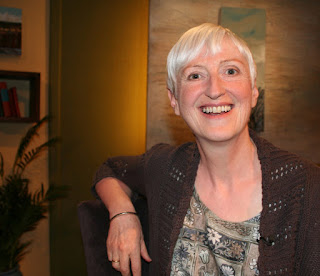