The Irish Feast of St. Gobnait 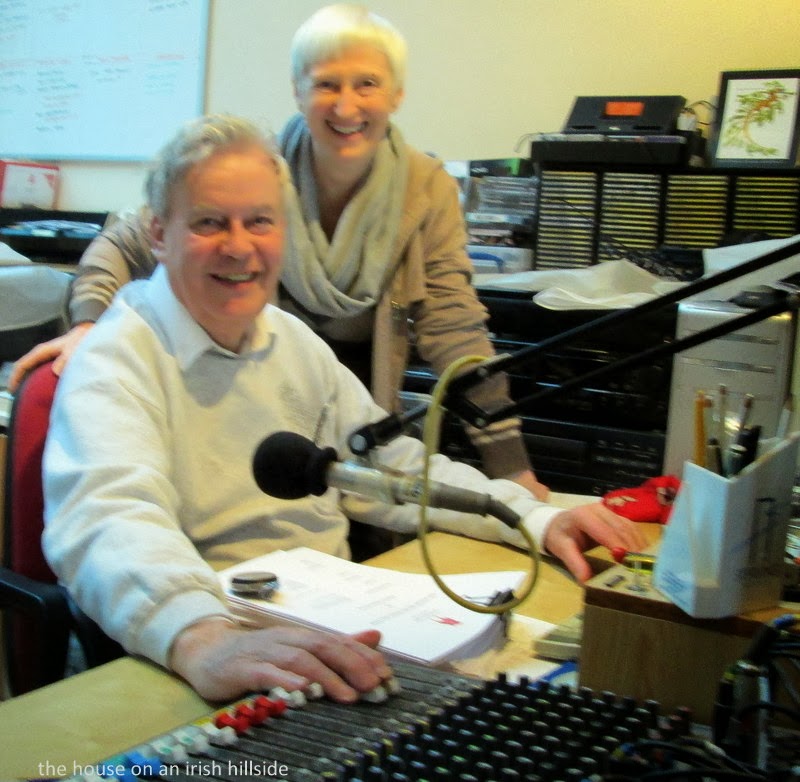 This trip to London was literally a case of my whole life passing before my eyes. In three days, working with a brilliant company called Crimson Cats, I’ve just recorded an unabridged audiobook of my memoir The House on an Irish Hillside. I loved it. Loved working with Michael Bartlett and Dee Palmer. Loved the fact that Wilf provided incidental music on concertina. Love the look of the classy design, and the response of readers and booksellers when they hear about it.

Now I can’t wait to hear the final edit.Tomorrow, February 11th, we fly back to Corca Dhuibhne. The significance of that date only hit me last week as I sat at the microphone in my sound booth. February 11th is Lá ‘le Gobnait – the feast day of St. Gobnait. Which means that as we’re sitting on a plane somewhere over the Irish Sea, high on a western clifftop, whipped by the Atlantic wind, the people of Dún Chaoin will be taking part in an ancient rite that’s survived there for thousands of years.

I don’t know if the realisation of that fact coloured my reading of the following paragraphs. You could hardly blame me if it did, considering what I’ll be missing.

“On St Gobnait’s day, for as long as anyone can remember, people have gathered at the well on the cliff above the ocean to perform a ritual that has roots older than Christianity.


The parish church in Dún Chaoin is dedicated to St Gobnait. She’s associated with bees, who fertilise trees and plants, and with healing. There are stories here about how she protected the people. In one she drives out invaders by turning her beehive into a bronze helmet and her bees into soldiers. In others she’s one of three sisters, all powerful healers. I remember the sense of recognition I felt the first time I realised that the stories about those three sister saints, and the dates of their feast days, are all echoes of Danú, the Good Goddess. Gobnait’s day is celebrated at the beginning of the Celts’ season of Imbolc. Her sisters’ feast days are in May, the season of Bealtaine, and at the end of July, which is the beginning of Lughnasa. Thousands of years before Christianity came to Corca Dhuibhne people imagined Danú as a goddess of three aspects; she was the maiden, the mother and the crone, images of the three stages of fertility. The maiden represented springtime. The mother was ripeness and harvest. And the crone was an image of withering, before the darkness of winter and the patient wait for the return of light in spring. There are memories of nine boatloads of people rowing from the Great Blasket island on Gobnait’s feast day, and of crowds of people climbing from the landing place to the clifftop. Rituals associated with holy wells all echo each other. People circle the well, usually three, five, seven, nine or nineteen times, praying. They move in the direction of the sun. They kneel and pray. Then they bend lower to reach the water, and drink three, or seven, or nine drinks from their bare hands. Then the circling may begin again, each round marked by touching a stone or throwing a pebble in the water. Before leaving the well, something’s always left behind, a flower, a feather, a pin, a rag or a coin. They’re gifts to the saint to remind her of the people’s prayers. Then the people go home and wait to be answered.”

In Dún Chaoin tomorrow, our neighbours will pray in St. Gobnait’s church and then climb the path to circle the well that once belonged to the Goddess. There’s a cross cut into a flat slab above it now and. just above the water, is a carved female head with wide eyes looking out towards the ocean. The ancient Celts carved no images of Danú. Instead they imagined her as present in the water in the form of a fish. In their shamanistic world view, the guardian spirits of sacred places often took the form of fish, birds or animals.
I remembered that last week as I read on through the chapter, towards my next coffee break, and came to this final paragraph.

“When I bent over Gobnait’s well to look at the tribute of wildflowers, I saw something else had been left there. Down at the level of the water, the pointed quill of a seagull’s feather was wedged between two stones. Held by the fixed quill, the feather itself reached out like a bridge. Out of the corner of my eye I saw movement in the shadow under the stones. Then a tiny shrew ran out onto the feather. She had sleek ash-coloured fur, delicate, five-clawed feet, and eyes like black pin heads in her narrow face. Her ears were like translucent pink petals. Balanced in time, her weight balanced on the quill held by the stone, she looked at me. Then the feather trembled, its shadow flickered on the water, and she ran back into the dark.” 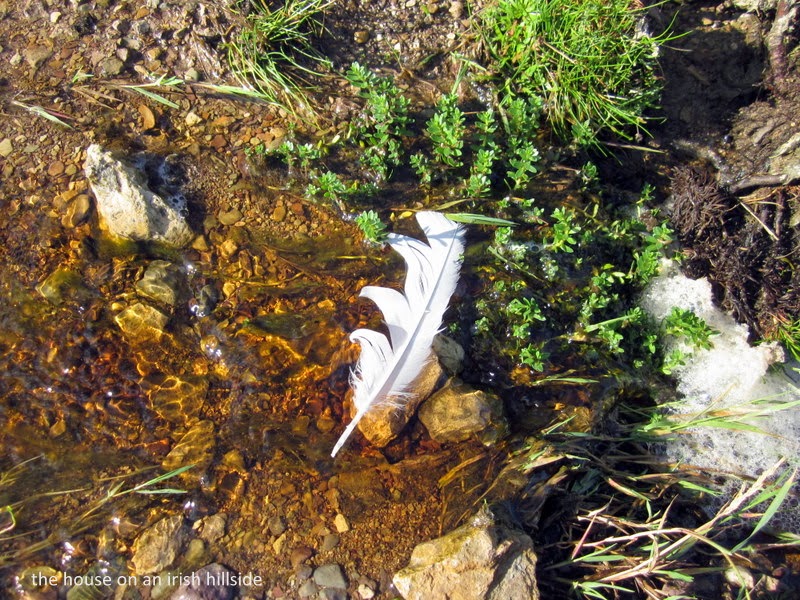