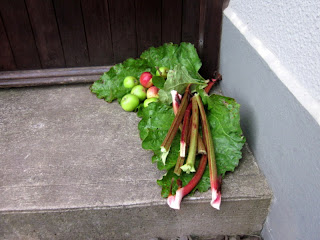 I love these autumn days when you bundle green beans, or garlic, or apples, into newspaper and take them round to a neighbour. And then come home to find somebody else has done the same thing for you.

It's the time of year when baking's completely arbitrary. A walk produces blackberries, so suddenly there's a pie. Or, if a pie's too complicated, it's three ounces of butter rubbed into eight of self-raising flour, three tablespoons of buttermilk and a beaten egg mixed in by hand, an extra sprinkle of flour to keep the ball of dough from sticking on the work surface, pat it flat and cut yourself nine rounds. Then ten minutes in the oven at 200c (make the tea while you're waiting) and there I am with my feet up by the fire, squashing dark, juicy blackberries onto hot, buttered scones.

But, to get back to that  gift on the doorstep, here's an arbitrary upside down cake. 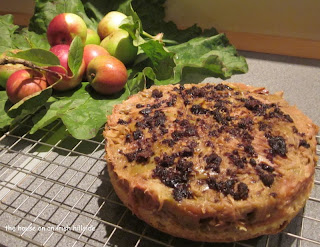 As far as I can remember, this one was rhubarb and apple - probably more apple than rhubarb - chopped small into a well buttered eight inch cake tin and sprinked with brown sugar - or maybe drizzled with some honey - and covered by a basic sponge mix.( I'd say I might have chopped some crystallised ginger in with the apple and rhubarb as well.)

Anyway, once it was baked, I turned it out onto a wire tray and sprinkled it with dark brown sugar which melted into the apple and rhubarb a bit as the cake cooled.... I use several different sponge mixes but I'm fairly sure this one was the simplest - four ounces each of self raising flour; soft margarine (or beaten butter) at room temp; caster sugar (or soft brown sugar). Two large eggs. I tspn baking powder. You sift the flour and baking powder into a large bowl, holding the sieve high to incorporate as much air as possible. Add the rest and whisk.

Bake for half and hour or so at about 180c .... and that's about it. Only you'd probably want to serve it with cream. And more tea.