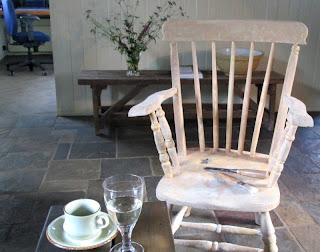 There's a family story that it was made as a wedding present. I don't if it's true.

I know that it once stood in my grandfather's home in Galway, in a room above his barber's shop in Eyre Square. I know that, when the shop was sold after his death, it came to Dublin with my grandmother, a charming, angry woman, who took to her bed on arrival and stayed there, in a temper, till she died.

I know that when I was born, my father shortened the legs so my mother could use it as a nursing chair.

I remember kneeling in front of it when I was five, playing house; I put a pastry board across the arms as a roof, and tucked my teddy to sleep on the seat.

As I work down through the layers of paint, the memories blur. The top layer is white. That was put on by my brother after my mother's death. Beneath it, there's a layer of Wedgewood blue. That went on when my father died. I remember my mother, alone in the home they'd made together, afraid that even to change the colour of a chair was somehow to betray his memory. 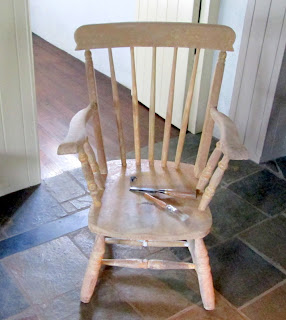 The next layer is brown. It's the hardest to shift. Underneath it, a creamy undercoat clings to the spindles and seat and needs digging out of the legs. The chisel is best to begin with, interspersed with blasts of a wire brush on the electric drill. Then we switch to wire wool and sandpaper. A nylon brush whisks away flakes and dust, revealing the knots and scratches, the marks of other, older tools, and the colours and grains of the different woods chosen by the man who made it.

After my mother died, my brother took it from Dublin to Enniscorthy. Weeks ago, when we drove to Enniscorthy for a reading of The House on an Irish Hillside, we collected it and brought it to Corca Dhuibhne. Wilf and I have no children. Where will it go when we're gone?

Under the steady, repeated gestures of chipping and sanding, turning and dusting, my mind plays with ideas for a new book. Then a sideways twist of the chisel takes me down to the wood, revealing two letters chiselled into the thickness of the back of the seat. 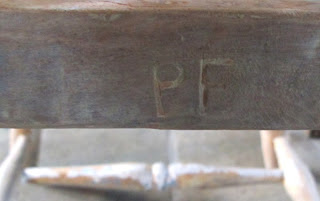 They're the initals of the man who made it. I don't know his name.