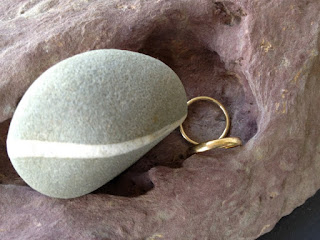 I have nothing at all against St. Valentine. He's a perfectly good excuse for consuming chocolate. And, given that there appear to be at least eleven possible versions of him, he's a very typical Christian saint.

Among the many legends about him is one which claims he was an early Christian priest, martyred for secretly marrying ancient Roman lovers. Another says he was a bishop who cured a pagan judge's daughter of blindess, converted the judge and baptised him, but later was stoned to death. Most of the stories make him Roman. But there's also a fairly convincing theory that both the saint and his cult of love were invented by the medieval English poet Chaucer, who also decided his feast day should be February 14th.

Typical too, are the stories about Valentine's relics. Venerated bits of him turn up all over the place, a fact that's a bit embarrassing because his complete body's supposed to be enshrined in a cathedral in Birmingham, England. Oh, and in a Carmelite church in Dublin, Ireland. The Dublin remains were deposited as a gift from Pope Gregory XVI in 1836. The Birmingham ones were a gift from Pope Pius IX in 1847.  (Equally embarrassing and looks a bit like carelessness, but there you are.)

Despite all this dodginess, the presence of  St. Valentine's shrine in Dublin has led to repeated attempts over the years to sell him as Ireland's Patron Saint of Love. Which, given the rival shrine in England and the unfortunate number of skulls and toes and things scattered round Europe, seems pretty daft to me. Especially as we've already got our own Irish God of Love who, let's face it, beats eleven sprurious Roman St. Valentines into a cocked, chocolate mitre.

Just listen to this:
- He was a beautiful young man, with high looks, and his appearance was more beautiful than all beauty, and there were ornaments of gold on his dress; in his hand he held a silver harp with strings of red gold, and the sound of its strings was sweeter than all music under the sky; and over the harp were two birds that seemed to be playing on it.  -

His name is Aengus Óg, and in Irish mythology he's the son of the great Dagda Mór and the goddess Boann, famed for his championship of lovers.

Admittedly, he doesn't do chocolate but he's ours and he's seriously sexy. I think we should dump dodgy St. Valentine and have Aengus Óg's day instead.

Visit my Author Page on Facebok