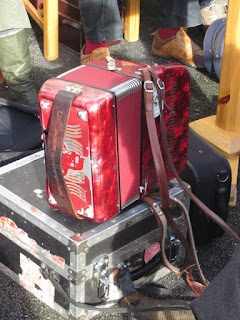 Last weekend, at the end of Ireland's Dingle peninsula, singers, musicians, students, teachers and locals, all gathered in Ballyferriter, a little village that gets taken over each spring by a dynamic school and festival of traditional Irish music. 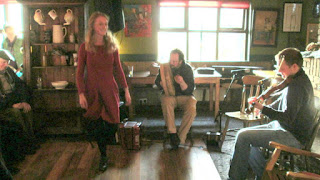 Every year each available room in the village gets colonised - in the school, the pubs, the café, shops and the local museum. There are classes on a multitude of instruments, including the harp, fiddle, accordion, bodhrán, banjo and mandolin, pipes, flute, mouth organ and concertina. There’s set dancing and step dancing. And then, at night, there are concerts with lineups of traditional musicians that bring audiences from Europe and America as well as from all over Ireland. 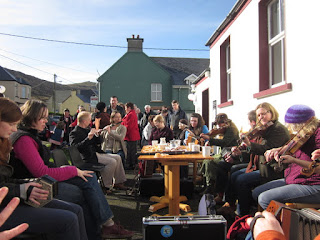 As long as I’ve been coming to Corca Dhuibhne I’ve heard discussions about how changing customs are changing the way that traditional music’s shared. Now, when everything’s globally accessible and often shared through video and sound files, individual styles belonging to particular places can easily be lost. That's one reason why Niamh Ní Bhaoill and Brenndán Ó Beaglaoich, co-founders of the Ballyferriter Scoil Cheoil an Earraigh, established their Spring Music School several years ago. It’s about the genuine, native, West Kerry musical style. The emphasis is on the passing on of a living inheritance rooted in the language and landscape of the place.

Yet the same global accessibility which can threaten local musical traditions brings together musicians with shared cultural roots on a wider scale, practitioners in specific styles on different instruments who revel in reaching out and finding links between Ireland's inheritance and their own. 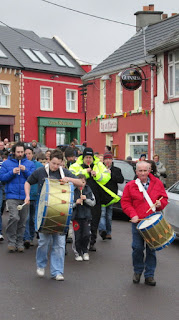 On Saturday in Ballyferriter the Gallician piper Anxo Lorenzo led a parade through the village and into the church, the only space large enough to accomodate the whole school of musicians playing together. Wrapped up in scarves and woolly hats, facing into a chilly wind blowing off the Atlantic Ocean, drummers in hi-vis jackets and tin whistle players in fingerless gloves crowded happily along the village street behind him. Inside, in pews, gathered around pillars, and standing on the altar steps, drums, fiddles, accordians, mouth organs, concertinas, guitars, harps, flutes, singers and pipers performed individually and together. 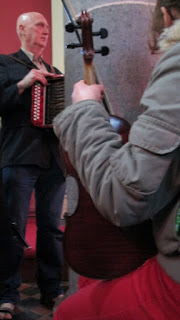 The heart of the music was Irish. But guest performers had arrived from Estonia, Sweden and Norway as well as from Galicia and Wales. And each evening guests, locals, students and teachers played and sang together in the pubs and the hotel bar, sharing, listening and teaching across nations and generations. 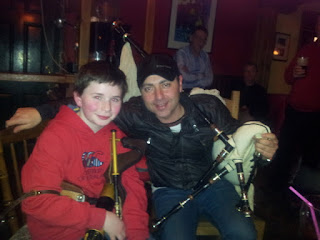 Last night, thinking about the cultural links between Ireland and the other countries represented at the Scoil Cheoil, I remembered that for centuries Dingle was the main embarkation point for pilgrims setting out on the long and hazardous journey from Ireland to Galicia, to the shrine of St. Iago de Compostela . 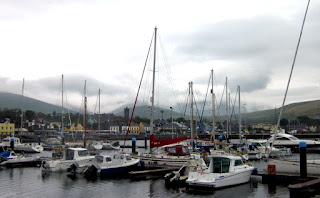 And then I remembered something else, about the shrine itself. Once there was a bishop in Galicia whose name was Priscillian. According to legend, his Christian teaching was full of echoes of pre-Christian Celtic beliefs, in which each element in the universe was linked by shared energy.

As a result, Priscillian was accused of heresy and executed in Rome, in 385AD. After his death his disciples are said to have brought his body back to Galicia. For centuries the site of his grave was unknown. But now it's thought that an early Christian burial discovered beneath the shrine in Santiago de Compostela may be evidence that the cult of the Celtic Christian bishop was supressed by concealing Priscillian's shrine under that of the Roman St. Iago, or James.

Meanwhile, back in Ireland, the present church of St. James in Dingle's Main Street stands on the site of an early medieval one, built and dedicated in token of the generations of pilgrims who once set sail from Dingle harbour on their voyage to Santiago de Compostela.

Incidentally, that Celtic belief in a universe linked by shared energy was held in ancient Persia as well. And in medieval Europe it was expressed in the concept of the music of the spheres.

Circles, spirals, links and layers. I love them.