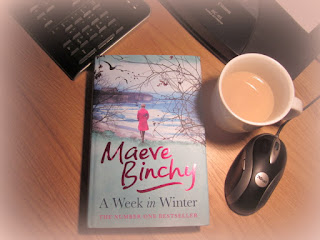 This time last year I wrote a sentence which I remember erasing twice. Each time I typed it I was afraid it might seem pretentious. And each time I erased it I felt like a coward and typed it again. ' My own trade', I wrote, 'is crafting the world into words'. In the end it took assurances and endorsement from others before I could let it stand.

Why is it so hard for a writer to have confidence in what she does? Why should I feel my statements need external endorsement before I can write them down? In the past I believed it's because writers work alone. There's a sense in which we create without any context: and that's ironic because creation is about contextualisation; the act of writing is about  framing and re-framing life as a series of pictures, juxtaposing one against another to provide the balance and perspective that enhance awareness of the world. All in an attempt to understand it.

For over a year, as I wrote The House on an Irish Hillside, I explored the ancient Celtic concept of a joined-up universe in which everything that exists, or ever has existed, shares a living soul. It's a worldview that expands the idea of individuality and redefines the function of community. It's rooted in the idea that balance is the essence of health. And it rejects the idea that death destroys life.

During that year, and in the months before it, my own life was shaken by death, and my perceptions of health and how to maintain it were challenged. Unable to write, sometimes unable to think, eat, sleep or - it seemed - even to breathe, I experienced two apparent opposites. One was the emptiness of feeling utterly alone. The other was the incomparable comfort of communal support from neighbours and individual support from friends.

Among those friends was Maeve Binchy, whose warm, unsentimental, practical advice arrived in a series of phone calls and postcards, supplemented by large glasses of white wine and plates of smoked salmon sandwiches. I'd known Maeve since I was a child and when she died in August this year my world, which still felt delicately balanced, was suddenly shaken again.

Maeve's funeral was a celebration of her life. Her coffin emerged from the church to the soaring sound of  traditional Irish music. Her photo was displayed in shop windows in the streets of the little town she'd lived in, where her neighbours lined the pavements to say goodbye. Tributes poured in from statesmen, fellow-writers and readers, all praising her talent, generosity, compassion and charm. Along with huge numbers of her friends throughout the world, I've missed her ever since.

A few days ago I travelled from Corca Dhuibhne back to London and found a padded envelope waiting among my post. Inside was a copy of Maeve's latest book, A Week in Winter. It was sent, said the inscription, because Maeve had wanted me and my husband to have it and it came 'with her love'. It's vintage Maeve Binchy - warm, compassionate and astringent, razor sharp and richly intelligent. And, like everything she wrote, it's informed by equal measures of energy, enthusiasm and optimism.

Before she died Maeve made a statement. She didn't believe in god, she wrote. She'd thought about it for a lifetime, wanting to hold onto the faith in which she'd been raised. But she now knew that what she believed in was life, love and kindness, and human potential for good. It was a brave statement and I suspect that in making it she may have lost some fans who saw her as a feelgood writer who dealt in certainties, not soul-searching. But a life of examined awareness had led to her conclusion and, as a writer, she needed to share what she perceived to be true. Her funeral was held in a church where the priest reiterated her statement from the altar. It was an honest, dignified memorial characterised by no hypocrisy, deep grief and much humour.

Like Maeve, I don't believe in a god. But I don't believe either that death's destroyed her life. In the obvious sense she still lives in her books. But that's not what I mean. Everything I've learned from my own experience suggests that our Celtic ancestors were right. On some level that exists now, in a circular universe in which linear time as a concept is irrelevant, everything that exists continues to exist and shares a living soul. So, although it wasn't published until after she died, I think that the book that's beside me on the desk as I write this really has come with her love.

In the past I believed that isolation was part of the writer's condition. In a practical sense that's true, and it makes the perfect environment for crises of confidence. But the real truth, I think, is that it's impossible to be alone. I believe that as writers we create as individuals. But we reflect a world within a universe where everything's joined up - a state in which each element is vital and equal, and all are balanced by an animating flow of energy which means death's always pregnant with life.

I wish I could talk to Maeve about that. Balance expressed with humour inhabits the heart of her work. For much of her life she lived with ill health. She knew light doesn't register without darkness. There've been so many times since she's died that I've reached for the phone and been stabbed by the memory that she's gone. She was a mentor as well as a friend. I loved her bossy, witty, crystal clear analysis of situations and ideas, the stories with which she illustrated them, her certainties and her doubts. I'd value her opinion of my own new, still slightly precarious worldview.

And I'd like her to know that I no longer need anyone's endorsement to have the courage to write it down.