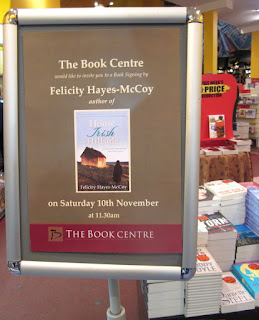 It was dark last night as we drove home across the country. Our last stop had been in Clonmel at the seventh bookshop in three days in which I'd met booksellers, chatted to readers and signed copies of The House on an Irish Hillside before taking photos, grabbing another coffee and a sandwich and taking to the road again with the mapbook on my knee.

It had been a lovely trip along autumnal Irish roads that snaked between broad, harvested fields edged by stone walls, tall trees or golden-brown beech hedgerows. But as darkness fell and rain began to spatter the windscreen my mind was reaching out for the rougher, wilder landscape of West Kerry, Tí Neillí Mhuiris and home. 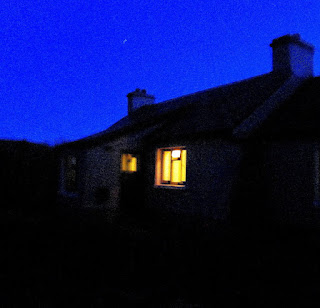 We lit the fire when we came in, sweeping away the soot and ashes blown down onto the stone hearth in our absence, and heated soup for our supper. A fierce wind was gusting from the ocean. Later we slept again in our own bed, protected from the gale by the cluster of ashtrees planted at our north gable nearly a hundred years ago by Neillí's husband, Paddy.

This morning we got up late, pottered round a bit and walked down the hill to see Jack.

His kitchen was warm and welcoming, full of the lingering smell of a fine chicken dinner, just being cleared from the table. We sat down and chatted about book signing and the weather, and the birth of a new baby to a neighbour below in Ballyferriter. The table was cleared and wiped clean, the scraps were gathered onto a plate, and outside the door Spot twitched in anticipation of her own dinner. She eats it each day from an old fryingpan at the corner of the house, scrupulously leaving a few mouthfuls behind her for the hens to eat in their turn. 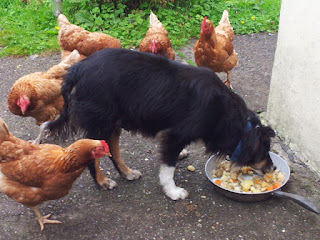 As the chicken carcass was removed from the table we were still talking schedules and book signings. Someone asked about the date - was today the tenth or the eleventh? 'It's the eleventh,' said Jack as the rest of us glanced round for the calendar or reached for the local paper. 'It's St. Martin's day'.

And he told us another story about Tí Neillí Mhuiris.

Neillí always killed a hen for St. Martin's day and Paddy took his dog up onto the mountain and killed a hare: they were plucked, skinned and prepared by Neillí and cooked over the fire on the hearth I swept last night. It was always the way on St. Martin's day, to eat a fine dinner.

I asked Jack why and he just shook his head. 'It was always the custom'.

When we came back to the house I switched on the computer.

St. Martin's Day, or Martinmas, is a time for feasting, when autumn wheat seeding was completed, fattened cattle were slaughtered and, historically, hiring fairs were held where farm labourers gathered looking for work. In the Christian calendar November 11th is dedicated to St. Martin of Tours, a Roman soldier who was baptized as an adult and became a monk. From the fourth century AD to the late middle ages much of Europe observed a period of forty days of fasting beginning from St. Martin's Day. And on the eve of the fast people cooked and ate a fine dinner, which traditionally included a cockerel, a goose or a hen.

But the tradition of feasting on St. Martin's day is far older than Christianity. November 11th falls roughly midway between the September Equinox and the Midwinter Solstice. It's one of the ancient Celtic festivals associated with harvest-time, when bonfires were lit on the hills, cattle were slaughtered, and the blood of sacrificed cockerels was sprinkled on thresholds to bring fertility to the farm and protect the household from famine in the dark months ahead. It was a ritual act, traditionally carried out by the woman of the house. Afterwards the whole family would feast on the sacrificial victim.

'It was always the custom to have a good dinner on St. Martin's day,' said Jack. 'Paddy hunted a hare on the mountain. And Neillí always killed a hen.' 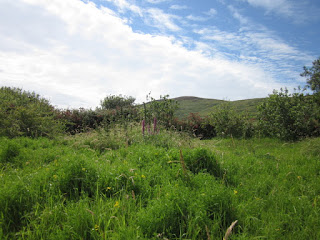