April 14, 2012
Last Monday night we emerged from a music session in Cloghane to find snow on our car. Only a few hours earlier the evening had been balmy. Now the bitter wind cut sharply as a knife. There's nothing unusual in that, though. It's just Scairbhín na gCuach - the time known locally as 'the rough month of the cuckoo'. 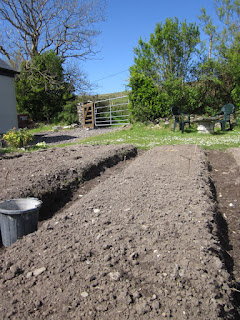 Scairbhín na gCuach lasts from about mid April to mid May. It's the reason why our potatoes went in a fortnight ago, our onions were set yesterday, but we can't set any seeds yet for fear they might be frosted.

The scairbhín brings sudden dips in temperature, unexpected changes in wind direction and violent showers of hailstones, sleet and snow. But it also brings cloudless blue skies and glorious sunshine like yesterday's. It's an in-between time, a recognisable transition between one season and another.

And the sharpness of its contrasts make it a time of heightened awareness. 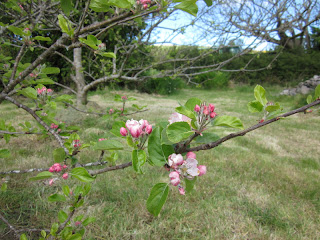 In the last two days blossom's appeared on our apple trees. The trees themselves have learned to grow low; the best of the blossom springs on branches protected by  hedges. 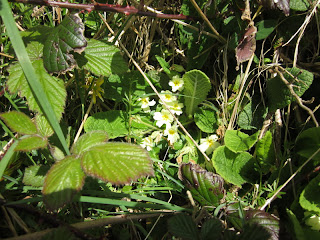 All along the ditches briars are putting out leaf. Their dark tendrils curl like a fretted lattice over last month's pale primroses.

The sycamore is budding.

Each day as I work in the garden, nesting crows creak past overhead. Tiny blood-red fuchsia buds shine against deep green foilage. Sunlight turns backlit montbretia leaves to neon-green spears.Yesterday, behind the old byre, I found flowers on the pear tree. Two years ago we liberated it from a supermarket, a sad, dry stick with its roots wrapped in plastic. Now, as the sap rises, it promises sweet buttery puddings flavoured with ginger and honey.

And each day from first light the air rings with birdsong. I haven't heard the cuckoo yet this year and I don't know why the month of the scairbhín belongs to her. It's a rough month, so maybe it's because she's a bad guy who abandons her egg in other bird's nests and destroys the host bird's hatching. Or maybe it's because she's the herald of summer to come when the scairbhín's over.

All this week I've been guaging the time before my next trip to London. As I turn the earth here on an Irish hillside my mind's eye sees mother-of-pearl sunrises over the river Thames, and flowers springing to life in city gardens. At these times when my life in one place becomes tinged with anticipation of the other, my awareness of each place seems to be heightened.

And today, remembering the words of a medieval English song, I suddenly realised that the cuckoo's promise of summer belongs in the folk memory of both. 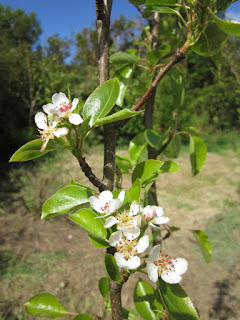