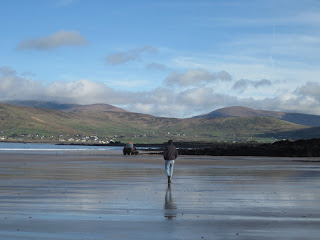 Here in Corca Dhuibhne this week's about watching the weather. One thing you don't want on St.Patrick's Day is rain on your parade.

The weather at the end of the Dingle peninsula sweeps straight in from the Atlantic, so with a strong wind behind it the rain can pass us in minutes. This year primroses and celandine are already in flower by the roadsides. And shamrock's growing wet and green in the fields.

And last year the weather was glorious. Sitting in the church in Ballyferriter I watched dust motes dancing in sunlight as the congregation sang Dóchas Linn Naomh Pádraig. Later, over the gentle sound of An Drúcht Geal Ceoigh on the organ, you could hear sheep calling on the mountain.Then, as the priest left the altar, the church doors swung open and people streamed out into the sunshine to the sound of whistles, concertinas, accordions and fiddle, all playing St. Patrick's Day in jig-time.

Outside, neighbours shook hands and swapped news. The musicians inside were still playing polkas as people crossed the road from the church to the café and sat out of doors to drink tea and eat scones. Everyone wore a touch of green, a scarf, a bunch of shamrock, and - in the case of the kids - the occasional green and gold Kerry football strip: when it comes to emblems of identity round these parts, the national saint and the national game run pretty much neck and neck.

I remember the sun on my face outside the café, the smell of the sea from the beach, and the shadows of clouds on the mountains.

And I remember climbing the steep road home afterwards, while my mind turned the bright kaleidoscope of stories, ideas and images I was trying to capture in a book.

The book's called The House on an Irish Hillside and from that day to this I've been working on it. Months of writing, rewriting, editing, agonising, panicking, refocusing, and allowing the kaleidoscope to turn. 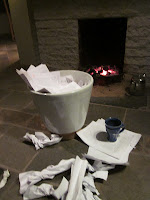 Then more months of copyediting, proofreading and discussions about design.

This week, for the first time, I've seen the cover - an image of an isolated house, high on a hill, with a golden sunset casting shadows across cropped green grass. It captures a beautiful sense of energy in stillness. And the colours and proportions are a perfect reflection of the intense effect of light in Corca Dhuibhne.


The image isn't available from the publishers yet so I can't show it here.

But now that I've seen it I can relax and enjoy the parade.

Which brings me back to the weather. Last night the sun went down through wisps of ragged fog. The sky was silver, not golden, and the moon rose behind clouds.Today the top of the mountain's hardly visible. And the tv forecast for Saturday's not looking good. 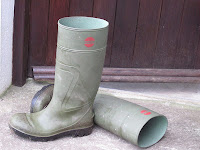 So my own touch of green this St. Patrick's Day may be wellies. 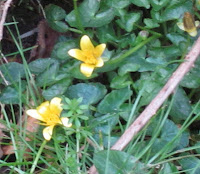 But we could get sunshine yet.