How to join a traditional Irish music session 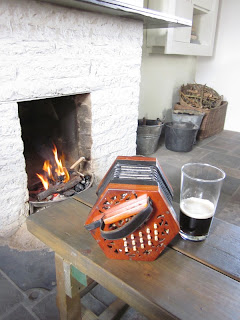 As with many things in life, the clue's in the name. And in this instance the name's in Irish.

I'm talking pubs here, and names over pub doorways. In Corca Dhuibne you won't find The Frog and Ferret or The Old Anchor. Instead you'll see names like Tigh Uí Mhurchú, Tigh Uí Chatháin or Tigh an tSaorsigh. The word tigh in Irish means house. So those names mean Murphy's house, Kane's house and Sayer's.

The reason's simple. Round here that's what pubs were till quite recently. Ordinary houses where people came together to share each other's company after a day in the fields or out fishing.

I don't know why particular houses were chosen. The house where I'm writing this was one. It's a low stone house, built over a hundred years ago in the foothills of the mountain. People say the room was always warm; that its high, boarded ceiling made a great acoustic for music; and that the couple who lived here had no children, so there was no fear of waking the baby. Maybe those were some of the reasons. I know that the couple were called Neillí Mhuiris and Paddy Martin and that their names are still a byword for hospitality.

In the past when the neighbours gathered in the evenings, there'd sometimes be a bottle or even a barrel to share as well. Other times there wouldn't. But there'd always be stories, dancing and music. The custom's called bothántaíocht. It's the reason why music's still an intrinsic part of Irish pub culture today.

Houses where neighbours gathered for nights of bothántaíocht were known as 'rambling houses' in English. Many pubs started life as rambling houses and went on to get a license to sell drink. Which explains the names. To the locals they're still Kane's house or Murphy's, or Sayers's - gathering places for neighbours and extensions of the owner's homes.

And this is something you need to keep in mind when you decide to join a pub session.

Sessions are organic gatherings, relaxed, friendly and convivial: you never know what combination of instruments will arrive on any occasion. People ramble in, order drinks at the bar and wander over to join the musicians, who gather round the fire or at a table. There might be fiddles, accordions, concertinas or whistles. Sometime there'll be pipes or a flute. Sometimes there's a bodhrán, the traditional Irish skin drum. People often bring several instruments and swap from one to another for different tunes. Conventionally Irish traditional music's played in unison, not harmonized, and new arrivals appear just to pick up the tune and join in whenever they feel like it.

But like everything else in Corca Dhuibhne, pub music-making involves courtesy and etiquette that's easy for outsiders to miss.

Everything's understated. Decisions are made with a nod or a glance but the sequence of tunes is always led by the senior member in the group, who also calls for people to sing or to play solo. New tunes and their sources are valued. People will want to know where you learnt a particular variation, where it came from and who taught it to you. Joining a pub session's a wonderful experience. You'll be welcomed and, if the musicians are local, you'll be drawn into a dynamic living tradition that stretches back across centuries.

Basically, what you need to remember is that you're a guest in somebody's house.


Visit Felicity's book The House on an Irish Hillside on Facebook