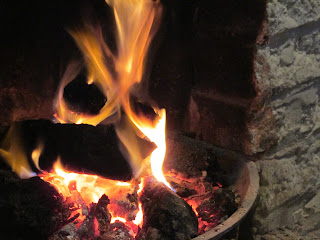 For the pagan Celts, the year began in winter, not spring. Their world-view celebrated dark times, recognising that life itself comes from darkness and a dormant seed.

The Celts' name for the first season of their year was Samhain, which is still the Irish language word for November. The festival that began their year was Oíche Shamhna. Samhain Night. It still goes by the same name here in Corca Dhuibhne.

With the passage of time and the coming of Christianity Ireland, the Celts' Oíche Shamhna celebrations were replaced by those at Halloween, the Christian feast of All Souls. But for thousands of years, throughout Ireland, the start of the season of Samhain has been celebrated with rituals older than Christianity - bonfires, candles stuck in turnip heads, and masked visits to the neighbours.

Modern trick or treating echoes the ancient Celtic belief that on Oíche Shamhna the spirits of the dead returned to the homes they'd once lived in. People believed that - provided the living recognised and respected their ancestors' presence - the dead would protect them. So each year the dead were welcomed with food, fires, music and dancing. That way they they wouldn't get offended. And get nasty.

And each year, in every neighbourhood, young men, wearing masks, went from one house to another acting out the annual ritual of threat and appeasement, fear and trust.

When I first went to London I remember being astonished when people said Halloween was an import from America. It may have returned to England from America fairly recently. But its roots are in Europe's Celtic heritage...

... though, having said that, I remember my own first Halloween mask was a cardboard Micky Mouse.

I wore it with a black polo-neck and tights, white gloves, and a long tail made of wool stiffened with wire from a straightened-out coat-hanger. Then my mother made me add a dark-grey duffel coat, with the hood up. Which definitely spoiled the effect.

On the other hand, I liked the sinister way my black tail showed under my coat when I turned away from the neighbours' doors with my pockets full of apples and monkey-nuts. I was a mouse that you wouldn't risk offending.

Then, back home, we'd sit by the fire drinking tea, eating brack, and cracking monkey-nuts with our teeth. None of which was easy to do through a Micky Mouse mask.

Masked kids knocking on the door and music playing are still part of Oíche Shamhna here in Ireland.

Yesterday  I bought monkey-nuts at the post office. This morning I made a brack, dark with brown sugar and packed with the slow-release energy of raisins, currants and sultanas. Tonight we'll eat them by the fire, drinking strong tea and chucking nut-shells into the flames.

An open fire is not the most efficient, or cost-effective, system. But gnarled branches of fuchsia burn well when the sap's dried out of them. And the ash-trees throw down rotten branches for kindling. And, for thousands of years, living flames have been images of life itself.

I remember our neighbour, Jack, coming into the house here one November day, and stretching his hand to the turf fire. It was chilly outside and the flames had burnt low. So I threw another sod on it. We watched red fire curl round black turf as the new sod took life from the old ones. The flames began to crackle and burn yellow. Then Jack said what we both were thinking ... 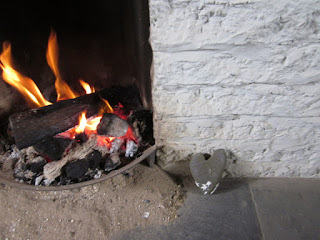 And the flames leapt up, releasing new life from the dark turf, compacted of fragrant herbs and ancient flowers.