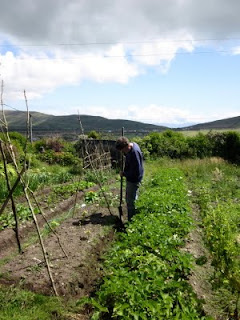 In some parts of Ireland these are called Lazy Beds. Round here they just call them ridges. First you collect your seaweed, at the start of the year when the Atlantic storms have thrown it up on the beach. Then you spread it on the land and wait for it to rot. Then, when the weather's right and the land's ready, you mark up your ridge with a length of string you've tied between two sticks.
And, working backwards, using a spade, you cut a straight line through seaweed and sod along the length of the string, from one end to the other. Then you go to the far end again, and work backwards again, along the same line, cutting and turning sods to form the start of the ridge. The men here work with the minimum of effort, sliding the blade of the spade under the heavy, oblong sods and flipping them over with a turn of the handle; their long-handled spades are perfectly balanced. They move backwards in unbroken rhythm, breathing to the swing of the work.
When you finish that stage of the first ridge, you move on to the second, using the string again to keep them straight and parallel. (That's a matter of pride and gets comments from the neighbours.) Each ridge is three foot across. They’re separated by narrow trenches. Digging the trenches provides both the sods that form the sides of the ridges and the earth that’s eventually shoveled over the seed potatoes.
In Ireland, different areas, and sometimes neighbouring parishes, have different ways of setting their potatoes in the ridges. In this village, sods are laid across each ridge, like the rungs of a ladder, and  the seed-potatoes are planted between them, in rows of three across. When each ridge is planted it’s covered with earth thrown up from the ditch. Then the earth’s gently beaten flat with the back of a shovel.
When the stalks begin to show, you keep the weeds down. When the stalks are the right height you earth them up, throwing shovelfuls of earth in under them and flattening it. Once they bush out enough, no weeds will grow between them. After that it's a matter of shaving weeds from the sloping edges of the ridges with a spade, watering when you need to, spraying if you must, and looking forward to the first crop of the season.
We're eating ours every day now. With a lump of yellow butter on each plate and well-chopped chives or scallions. No need for salt if they're grown in seaweed.
The sticks you see on the other ridge are lost now under green leaves and red flowers (beans) and green leaves and white flowers (peas). And between them there's beetroot.

It's Perfectly Okay Not To Be Shakespeare 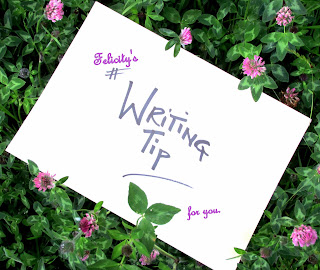 Here's one of my occasional writing tips. I hope those of you who aren't writers will find it helpful too.
As more and more people are required to stay at home, for the sake of our own health and others', we're increasingly being exhorted to take this time to be creative. "Write a diary!", people say; or "here's your chance to start that novel"; or "why not take up a new hobby?; or "Shakespeare used downtime during the plague to write King Lear, you know!"
Well, yes, that was what Shakespeare did, but a/ he was a brilliant, professional playwright and b/ he and his contemporaries were accustomed to the frequent, localised, bouts of plague that disrupted their lives and work and closed London's theatres. Most of us are neither of those things so, personally, I'd forget about using Shakespeare as a role model.
Instead, I'd suggest this. In these unprecedented times, many of us may be helped by writing down th…
Read more