This Weekend's The Festival Of Lughnasa 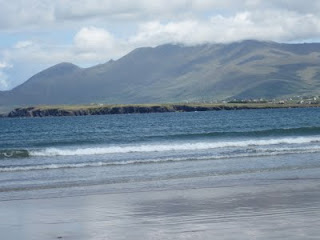 Here in Corca Dhuibhne the first weekend in August is the beginning of the fourth season of the Celtic year. It’s called Lughnasa. The ancient Celts held huge festivals to mark the turning points between one season and the next. They believed that the edges of the fabric of time weakened at turning points in the calender, allowing powerful forces to seep through. And they saw communal gatherings as a way to tap into the energy of the universe, and promote health and prosperity in the months to come.
The word Lughnasa comes from the name of the Celtic sun-god, Lugh, and his story’s one of the oldest myths there is. The Celts saw harvest-time as a battle between light and darkness which frees the crops from the earth and allows us to gather them. So they imagined the earth itself as a fertile goddess, and the sun as a god who becomes her husband. Their union was a symbol of balance, which promoted health. Each year at harvest time whole communities climbed to high places at Lughnasa. It was a festival that had deep religious significance. But it was also a seriously big party. Huge crowds, tents, music, bonfires, eating, drinking and dancing till dawn. There was horse-racing on beaches too; extended families met and hung out together; marriages were arranged; and animals were bought and sold.
Here in Corca Dhuibhne the party’s still going on.
In the local tradition the sun-god Lugh strode up Mount Brandon from the east each year, with flashing eyes and hair, and a golden spear, and defeated Crom Dubh, ‘the crooked, black one’. His victory’s still celebrated every year in the village of Cloghane, on the east side of Mount Brandon. When I was in Cloghane a couple of weeks ago the festival programme was being printed, musicians were rehearsing, and everyone was keeping an eye on the weather, hoping there’d be a good day for the annual climb up Mount Brandon.
Rain or shine, they’ll be walking a route that’s been walked here at Lughnasa for well over two  thousand years.