Fionn And The Seven Sandy Men 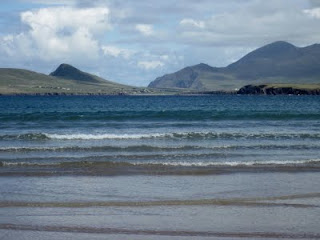 There was a hero called Fionn. He had a magic thumb.
Whenever Fionn needed to know things he put his thumb in his mouth and he bit it.
And then he knew things.
One day Fionn was out in the woods. And a man came towards him.
“I’ve a wife”, said the young man. “And my wife has a baby girl,” he said.
“And one night,” he said, “a big hand came down the chimney and it stole the baby."
So Fionn put his thumb in his mouth.
And he bit it.
And  he knew where the baby was.
“It’s this way,” said Fionn, “the big hand belongs to a giant,” he said, “and the giant lives on an island. “
“Is it a big island?” said the young man.
“It is not,” said Fionn, “it’s a small island, and that’s where he’s taken your baby.”
“I’ll do my best to get her back for you,” said Fionn.
“You couldn’t do more,” said the young man. “I’ll wait here for you.”
So Fionn walked away till he came to the seashore.
And there were  seven men there, sitting on the sand.
“Who are you?” said Fionn, “and what do you do?”
“I’m a Shipwright”, said the first man,“I build ships”.
“I’m a Finder,” said the second man, “ I find things.”
“I’m a Climber”, said the third man, “ I climb things.”
“I’m a Thief”, said the fourth man, “I steal things.”
“I’m a Listener,” said the fifth man,
“I can hear a whisper spoken
in a tall tower
on a high hill
at the other side of the world.”
“I’m a Marksman”, said the sixth  man,
“I can shoot an arrow through a needle.”
Then Fionn looked at the seventh man. “What do you do?” he said.
“ I’m a Gripper”, said the seventh man, “when I grip a thing I never let it go.”
“Will you cross the sea with me?” said Fionn.
“Why wouldn’t we?” said the seven men.
And they all stood up and brushed the sand off their trousers.
Then the Shipwright made a ship.
And Fionn and the seven men got into it.
And the Finder pointed his finger.“That’s the way to go,” he said.
So they went that way.
At sunset they came to the giant’s island. The giant’s house was at the top of it.
“You’re first,” said Finn to the Climber.
So the Climber climbed up on the roof. The roof was made of eelskins, so it was slippy.
But he climbed it.
He looked down the chimney. Then he went back to the ship.
“The giant’s snoring below on a bed, “ said the Climber, “and the baby’s beside him in a cradle.”
Fionn looked at the Thief. “You’re next”, he said.
The Thief got onto the Climber's back. And the Climber climbed the roof again and the Theif went down the chimney.
Then he stole the baby. And he brought her back to the ship.And they all set out to sea again.
Six of the men took two oars each. So twelve oars pulled the ship through the waves.
And the Listener sat at the back of the ship.
Listening.
“Can you hear the giant?” said Fionn.
“I can,” said the Listener, “He’s still snoring”.
The six men kept rowing. And the Listener keep listening.
“Can you hear the giant now?” said Fionn.
“I can,” said the Listener, “He’s waking”.
The six men kept on rowing. And The Listener kept listening.
“Can you hear the giant now?” said Fionn.
“I can,” said the Listener,"he’s running across the waves,” he said. “He’s chasing us”.
“I think I can hear him myself now” said Fionn.
“You can, of course,” said the six men who were rowing.
“You’d have to be deaf not to,” they said.
Because there was the giant, right behind them.
His big feet were turning the waves to foam.
And his big hands were reaching  out for them.
“Give me an oar!” shouted the Listener. They gave him two.
So fourteen oars pulled the ship through the waves ...
... but the giant was still behind them ...
... so Fionn put his  thumb in his mouth  and he bit it ...
... and then he knew something.


“Marksman!” he shouted,
“What?” shouted the Marksman.
“Do you see that red spot on the giant’s hand?” said Fionn.
“I do not,” said the Marksman. “I’m too busy rowing.”
“Well, stop rowing,” said Fionn, "and take aim at that spot. There’s nothing can kill the giant,” he said, “ unless a marksman shoots an arrow through the red spot on his hand.”
“No bother to me,” said the Marksman, “can’t I shoot an arrow through the eye of a needle?”
“Haven’t I won prizes for it?” he said. “Only last week I was up at a county fair ...”
“WOULD YOU STOP THAT TALKING,” shouted the other six men.
“ WOULD YOU SHOOT AN ARROW THROUGH THE RED SPOT ON THAT GIANT’S HAND? ”
“Oh, right, so”, said the Marksman.
He stood up in the ship with his bow in his hand. He aimed at the red spot on the giant’s hand.
And he shot an arrow straight through it.
The giant let out a roar. His head went down and his feet went up and he fell down dead behind them.
It was like a mountain falling into the sea.
A big wave washed up over the ship. They all fell back in a heap.
Then the ship rode on  through the falling wave and it sailed clear beyond it.
They all sat up and looked round them.
“ Where’s the baby?” said Fionn
“Was she washed overboard by the wave?” said the Shipwright.
“When we all fell down did we squash her?” said the Climber.
“Maybe she was”, said the Listener.
“Maybe we did,” said Fionn.
But they’d all forgotten the Gripper.
No trouble to him.
He had a tight grip on the baby.
Not a bother on her.
“We’ll go on home, so,” said Fionn, “and we’ll give her back to her daddy.”